The “sensaryo” or sometimes “sensaryohan” is one of the tools that we regularly make and use when me and my brothers were just little kids in Camiguin Island, Philippines. Every weekend, we hiked up to Manduao, a remote barangay of Catarman, to spend time with our lolo and lola in their nipa hut. The way up wasn’t easy. The trail was bordered by thorny shrubs, big trees, grasses, coconuts, bamboos and banana plants; and hungry mosquitoes, lots of them. Good thing we always carry with us the “sensaryo”. It’s very convenient and handy. By swaying it, sometimes in full rotation just for fun, the smoke envelopes our immediate surrounding, preventing the mosquitoes of coming near us. When the fuel comes low, we can always pick some bits and pieces of dry twigs and coconut husks found along the way. 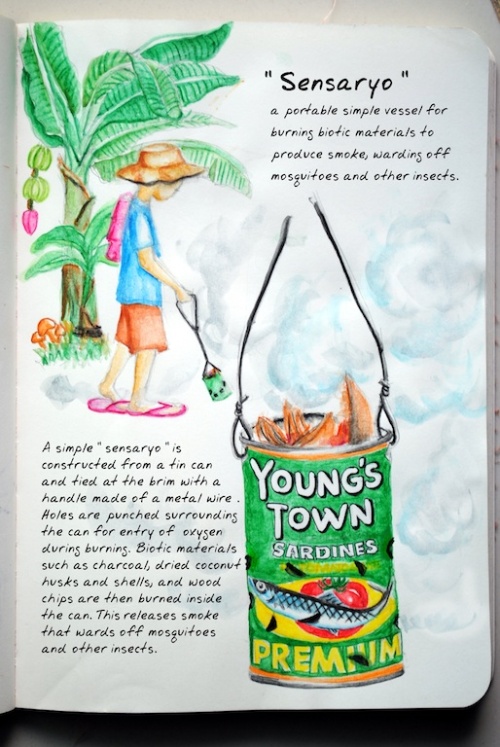 I really didn’t know why it’s called “sensaryo”. I just imagined it as something much similar to that use in a church ceremony where the priest spread incense smoke inside the church. I found out,  after a few readings that the device used by the priest to spread incense smoke (censing) is called a censer. A censer is a vessel used for burning incense. In different cultures and religious practices, the construction and design of the censer varies. Now I know why it’s called “sensaryo”. It’s the local term for censer. It just happened that I learn of it first as something we used to ward off mosquitoes rather than as the tool used in church for censing.